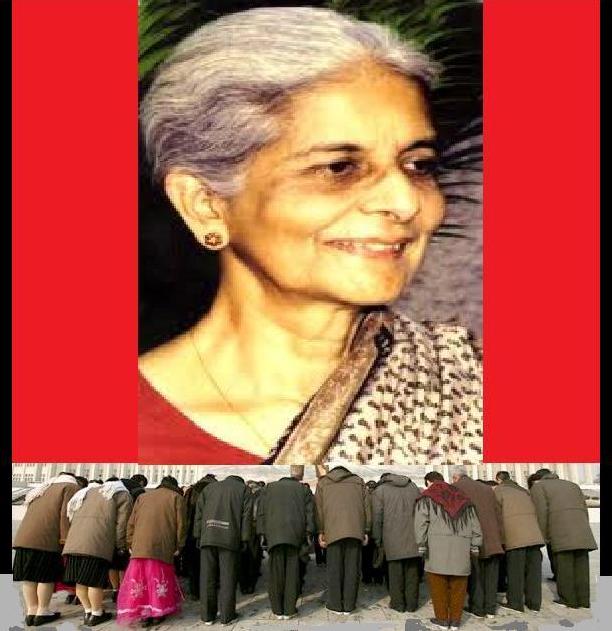 Reduced to the role of mediaeval courtiers during

her reign, the General Council still seem to be

afraid of Radha Burnier, after her death.

What was the priority for a General council member going to Adyar? Was it to represent the Theosophical Society members who elected them and trusted them to fight their corner and protect their interests? Or was it to curry favour with Queen Radha to secure a privileges and prestige at her court? If the General council ever bothered to represent the members during Queen Radha’s thirty three year reign, there’s nothing to show for it. Silence now follows.

All this came about because the consequences of not being in favour were dire. Like a mediaeval monarch, Queen Radha sent subjects (members) into exile from Adyar. This was at her whim and not through any formal hearing procedure during which a victim could argue their case. Exile appears to have been permanent so there is a hint of “off with their heads”. Although there is no evidence that General Council members were exiled from Adyar as in the case of non-executive members who fell foul of Queen Radha, it was common to be excluded from proceedings and become persona non grata as far as the Royal Court was concerned.

This extract is from an article of March 17th 2012 entitled; “Adyar, Where do we go from here?”

“Once out of favor, these persons, often stalwart workers holding key positions and known for their integrity and dedication, were fully ignored, ridiculed, slurred, thrown stones at, not invited to speak at the annual International Convention in Adyar or referred to ironically in front of a packed Adyar theatre.”

The public humiliation in a packed theatre has a touch of the Stalinist show trial. But Radha Burnier was not Stalin and something could have been done to put a stop to all this nonsense. On this occasion, the General Council’s silence gave consent.

Why was this situation allowed to develop and continue for so long? The General Council had thirty three years to sort this out but was too weak to do so. Too ashamed to admit that they were allowing this situation, the General Council members took the easy option of keeping quiet and maintaining the pretence of being the governing body. They are still frightened of Radha Burnier after her death and one of the reasons for the current silence is the fear that the extent of their submission to Radha Burnier’s dominance will become fully known. They certainly lost control of the Adyar Estate and the Society, and never represented the interests of the members. Moving the international headquarters to another location would be a good strategy for concealing issues surrounding use of the Adyar Estate.

Who controls the Theosophical Society now? Radha Burnier made appointments to the General Council to do her bidding and powerful members on the old court will still be able to exercise power as a Burnier Party within the ruling elite. Elements of the old court may still exist but judging by past record, the elected members of the General council will never do anything about it.

How can such people, with a consistent track record of weakness and failure to fulfil their function of fighting the member’s corner, be allowed to remain in charge of the Adyar Theosophical Society?

Rather than indicate superior infallible beings destined by divine right to rule the Theosophical Society, their silence indicates weak inadequates hiding under the table from the realities of effective leadership, and refusing to answering for their track record. They are management imposters who have cheated the members for decades and there is no telling what damage are they continuing to do. The Society will be well rid of them and should tell them to go immediately.