affairs in their own organisation.

Elected leadership has closed itself

off from the members that elected it and

now functions as a separate organisation.

Members can only conclude that the

leadership has plans to formalise its

position after the presidential election. 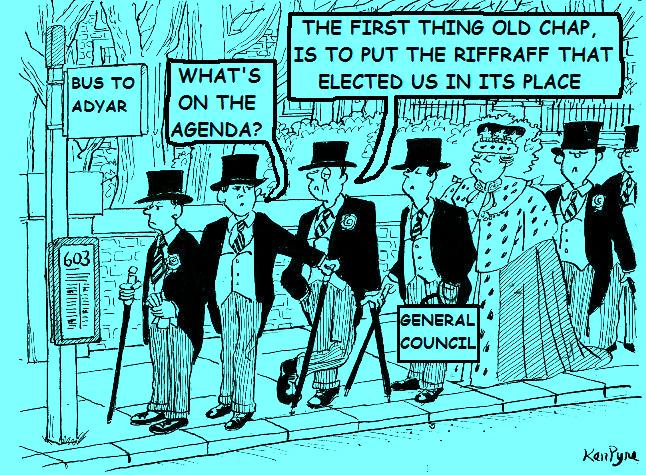 It is now clear that the actions of the Adyar Theosophical Society ruling elite have effectively disqualified the members of the Society from full membership and have relegated them to the level of associates or followers. The elite appear to be moving towards the format of clergy and laity in their relationship to the members.

The elite has now formed its separate organisation which protects its power base and excludes the members from participation in what they thought was their Society. Exclusion of the members is the key to this and there may be moves to formalise this position after the carefully managed election. If information is withheld now and the elite refuse to answer the members’ questions on Society affairs, then the situation is certain to be worse after this inconvenient election is over.

The leadership permits no discussion on anything, and seems to be forging ahead with its plan to form a separate organisation from the Theosophical Society but retaining the power to control it. Any new body of this type would probably be supported by members’ dues but would preserve itself as a self perpetuating closed order with new members only admitted by invitation. The Society has probably seen the last of discussion, and the current presidential election may well be the last that the members are involved in. A leadership that permits no discussion is characteristic of many religious cults.

Is the Adyar Theosophical Society moving towards a self perpetuating Theosophical conclave presided over by the Bishop of Adyar with the members relegated to the position of followers with no say in the running of their own society? Already the members are derided as “BALLAST”, and this term is highly appropriate to describe their position this new framework.

By maintaining silence, the leadership is making clear its intention to operate independently of the Theosophical Society and its democratic processes. Whether this separation is based on a belief in a divine authority to lead, or that the members are not intellectually capable of participation in the running of the Society, is a matter of speculation, but it is now evident that the leadership and the Society effectively exist as two different organisations with contradictory and antagonistic agendas.

Given the current split between the leadership and members, the lack of trust in the electoral system and the leadership’s closure to discussion, the members are justified in demanding an inter-regnum in the presidency until the issues are resolves. The inter-regnum is required to allow time for consultations between the broader Theosophical Society and the General Council to take place. If the leadership is unable to allow this then it can only be concluded that the continuance of the Adyar Theosophical Society as an organisation of members is no longer possible, and both national sections and individual groups must determine their own future outside the Adyar fold.

The break-up of the Adyar Theosophical Society has been a real possibility for many years but the intransigence of the leadership makes reform of the existing system now impossible and the long anticipated break-up inevitable.